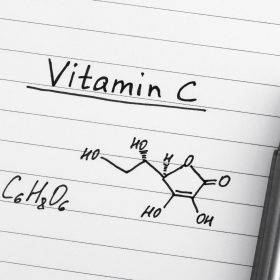 Let’s begin with some lesser known facts about vitamin C.

1. Vitamin C in the bloodstream
Blood levels of vitamin C is at maximum 400 mg and decreases by 50% every hour.
It means that after an hour it’s 200 mg, after 2h – 100 mg, and after 3h – 50 mg.
This is why it’s better to keep adding small doses often, that to take a large dose once. Especially in case of infection.
And when you’re supplementing, dividing your daily dose is a very good idea as well.

3. Witamina C in pregnancy, childbirth and breastfeeding
The time of pregnancy, childbirth and breastfeeding is characterised by increased need for vitamin C – supplementing possible deficiencies will prevent infant jaundice by up to 61%. Adding some extra vitamin C right after giving birth, even if you didn’t supplement before, may help quickly reduce bilirubin level in your baby.

4. Vitamina C and SIDS (Sudden Infant Death Syndrome)
Deficiency research has clearly shown that suddent infant death syndrome is strongly connected with vitamin C and selenium deficiency. Pregnant and breastfeeding moms – please remember to use a bio-available supplement. Large amounts of fresh fruits and vegetables may not be enough. Selenium deficiency in moms before they even get pregnant, which I will surely return to in a future post, has been linked with cystic fibrosis in the baby. Taking a whole spectrum of minerals, and those two antioxidants especially gives you a solid basis for a planned pregnancy or the one that you’ve just found out about.

5. Vitamin C and the brain (central nervous system)
Without vitamin C your organism cannot produce dopamine, which is not only responsible for good moods, but is also clearly deficient in people suffering from Parkinson’s disease.
Vitamin’s C anti-ageing properties are clearly visible in elderly people: grey matter is increased in volume in those who supplement with vitamin C.

6. Vitamin C in sepsis
There is a growing number of reports backing up dr Marik’s accidental discovery that replenishing vitamin C in sepsis patients helps them deal with shock and prevent organ damage. In heavy sepsis patients, he’s had almost 100% success rate with IVs of vitamin C, hydrocortisone and thiamine.
Vitamin C works in a similar way to hydrocortisone, so – in a moment of sheer brilliance – dr Marik decided to combine the two in the ‘hopeless case’ of severely septic 30-year-old woman who arrived at his ward. He didn’t expect to see her alive on the next day, but when he returned to work, she was already breathing on her own and – to everybody’s utter shock – after a few days her condition was so good, she went home. The woman who was supposed to be dead is well and kicking till this day.
Vitamin C and hydrocortisol mutually boost one another on multiple levels, and in the case of sepsis, they strengthen the immune function, reduce inflammation, prevent leaking of the blood vessels and subsequent organ failure.
I’m a strong opponent of the usage of steroids, especially intravenously, but there are life-saving situations and the efficacy of this combination is simply unbelievable.
And, of course, as hopeful as it seems in the case of ongoing sepsis, I’m personally even more hopeful about the fact that you can do your best to prevent severe illnesses, by ‘pumping up’ people with vitamin C even before they are admitted in hospital. Why dangle on the verge of life and death when you can use simple means to avoid it in the first place?
Proper levels of ascorbic acid in the blood help wound healing and recovery after surgery, so it’s wise to replenish it before surgery, dental work and going to the hospital in general. And while staying there, you can’t expect the medical staff to feed you with a lot of vitamins, so have a small bottle by your bedside and try to shorten your stay as much as possible. For me – mom admitted to probably every pediatric ward in the city and beyond – the very prospect of being able to shorten hospital stay sounds like pure blessing.
People admitted in hospital have on average a pretty low level of vitamin C. When they leave, it’s even lower. It’s definitely worth to try to help yourself, as every additional day in the hospital generates unwanted expenses, stress and adds potential danger of contracting a super bug, which is another sad story.

7. Vitamina C in detoxification
L-ascorbic acid binds toxic minerals, such as: lead (Pb), mercury (Hg), cadmium (Cd), arsenic (As) and nickel (Ni).
By the way, it’s worth knowing that nickel allergy is often observed in patients with non-celiac gluten sensitivity (NCGS).
Even 1000 mg of vitamin C can bind significant amounts of toxins, so it is said that people living in polluted cities, who inhale smog daily, eat fruits and vegetables from intensive farming and highly processed food should take at least 4000 mg of vitamin C every day, preferably in divided doses.
I think that even 1-2 g is a pretty high dose, but it’s wisest to simply observe your reactions and see what dose makes you feel better.
Anna’s Bee C works great here, as the 1:1 ratio of ascorbic acid and organic sulphur strongly oxidizes and detoxifies the body.

8. Vitamin C in wound healing and burns
Ascorbic acid is highly effective in wound and burn healing.
But a truly large dose is required for best results, to lower the inflammation and boost regeneration – usually 4000-5000 mg / h.

9. Vitamin C in asthma attack
In asthma attack (I tried this more than once!) I took 6 grams of vitamin C every hour (2 tablespoons of Anna’s Bee C) – after the third hour the tightness was gone.
I’ve read that in severe attacks you may need up to 50 g of vitamin c in 8 doses (6 g / h or 3 g / 30 min), but fortunately I never had a chance to reach that point.

10. Vitamin C and hay fever
Vitamin C together with MSM seal the mucous membranes – so both allergic rhinitis and sinus inflammation can be much milder, when you’d properly supplemented.
And sodium askorbate in powder form (I’ve never tried it yet) is famous for brilliantly clearing and opening the sinuses – a pinch sniffed is enough, they say. White powder is white powder, after all 😉
They also say that it cleans the sinuses more effectively that rinsing, and I’ve been a strong proponent of rinsing and bat-style flooding for years 🙂

11. Vitamin C in dialisis
One of the conclusions of dr Janusz-Grzybowska’s trials is that we observe the lowest serum levels of vitamin C and consequently the largest deficiencies in the whole body, in the beginning of spring. When it comes to her studies, we are mostly “the control group” and we can hope to replenish vitamin C levels with spring fruits and vegetables, which contain the most amounts of it, while the same fruits and vegetables in the summer contain significantly less. Therefore, the beginning of the year marks the point of using up the last reserves from the previous spring and summer (or there is no longer any reserve) and we function virtually in scurvy mode.
We can consequently deal with weakened immunity, low energy, apathy, paleness, bleeding gums, slower wound healing, oedemas, no apetite…

And now let’s get to the more practical information:

12. Vitamin C in every-day supplementation
They say that an adult living in a polluted city should take about 4 grams of vitamin C each day. That’s 4 teaspoons of Anna’s Bee C, that will help you detox from smog and boost your immune system.

13. Vitamin C in virus infection
If however you are attacked by a virus, you need to counter-strike with full force.
In our family, we start with a tablespoon of our syrup, and then continue with 1 teaspoon every 30 minutes until after the symptoms go away. Sometimes, they’re gone within hours, sometimetimes on the next day, but even chickenpox was retreating after 72 hours. The very important advice is to never stop taking larger doses of vitamin C immediately after the virus retreats, because the illness may quickly return, as your vitamin C supplies have been used up in the fight while the enemy is still at the door 🙂 The wise thing to do is to keep the dose up for at least another day, to prevent the infection from returning.

You will know the saturation point by a loud soliloquy of you stomach or even by a slight diarrhea.
Vitamin C i soluble in water and excreted by the kidneys. If you take a lot of it, your body cannot keep up with flushing the excess out and intestines come into play. Diarrhea is nothing to be afraid of, just a sign that you’ve reached saturation point. With the first signs of indigestion, we lower the dose and observe the patient. If they’re not dehydrated and clearly recovering, there’s nothing to worry about. Just remember to drink a lot of water.